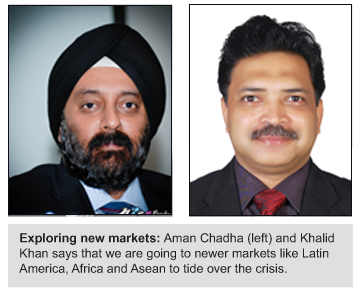 Euro zone crisis is quite alarming and has changed the business equations in many a countries. The economies dependent on the European market are facing tough times. The slowdown is happening and expected not only in the euro zone countries but even in the emerging economies like China and India. Indian exports are also likely to be affected in days to come. Now it all depends on the entrepreneurship of the Indian businesses on how would they tackle this crisis and whether or not emerge as winners in the final count. The increase in interest rates due to constant RBI intervention has precipitated this crisis as funds are becoming dearer day-by-day and cases of corruptions raising its ugly head time and again affecting the overall business sentiments. The weak rupee offers benefits to the exporters in these troubled times. The weak competition offered mainly from the European countries can be used as an advantage in grabbing some of the markets addressed by their exporters. On the sidelines of EEPC India – Western Region Awards for 2008-2009 held at Taj President recently, Sandeep Sharma, Executive Editor, Project Reporter spoke to Aman Chadha, Chairman - EEPC India and Khalid Mohammed Khan – Dy Regional Chairman, EEPC Western Region about the Engineering Exports scenario, impact of euro zone crisis on the engineering exports, future outlook and exports quality issues. Edited excerpts…

What is the likely impact of the euro zone crisis on engineering exports?

Aman: We are already going through the impact and will only get better I feel because we have already been hit by the euro zone - the Greece issue, the Spain issue which is there. If you look at Europe, 20 to 25% of engineering exports go to Europe from India that has fallen down to around 17% odd percent. But exports to other markets of Latin America have increased. We already felt the brunt to certain extent when we talk about these specific countries - Germany is doing good, that's one of the largest purchaser of engineering goods, so is UK, France, these are sort of isolated from euro zone trouble as of now. Greece is not a big purchaser of engineering goods from India nor does Spain to that extent so these troubles which are there are isolated to their economy and not to the engineering exports obviously to a certain extent they are, but not had huge impact like any other economy would probably have.

What can be the approximate percentage of impact on engineering exports?

Aman: As I said earlier, it is 17% of what we are exporting to the EU. It was higher earlier, around 20 odd percent, so it has come down by 2 to 3 percent. But that's not only because of the euro zone issue that's because of the depression all over and our diversification to other markets. As a result of which that percentage has come out and other percentage has increased. In terms of value it has increased. In terms of only percentage it has fallen. But in terms of value we have definitely increased with the EU. So, we are still growing despite of the depression which is there, that’s the result of a, you see in the last six months - eight months, we have grown 100% plus.

What about the next fiscal?

Aman: That will definitely fall.

What can be the percentage?

Aman: We can't say. We have many exporters who come back to us and said that their order books are nil and people who work on 3 months advance booking you know, those companies said that they don't have any orders in hand, which is alarming.

Khalid: But that's actually correction. This correction will play out after 3 months.

What's the recommended action by EEPC or what kind of initiatives are you taking to protect the interest of the exporters in this time of crisis?

Aman: We are going to other markets like Latin America, Africa, Asean where we are getting into more trade agreement, FTAs. With Columbia we are in talks, we are in talks with lot of other countries in South America to help negate the duty; you know the distance which is there from India in terms of time, in terms of trade barriers. Trade barriers will definitely fall once we have our FTA into place

Khalid: We are marketing, Basically we have become an export promotion body more than trading, I mean we go out advertising ourselves and we have lot of shows lined up for the next few months such as buyer-seller meet. If you go out you market your selves. See, that's how you are going out the markets.

Aman: Like in March we have IESS Indian Engineering Sourcing Show. We are bringing 715 foreign delegates to India, to showcase what their requirements are. So once they tell us what they have, we have tHE matching companies in India who would probably give them what they require, will definitely help boost exports in the country.

What about the awareness to enhance quality standards?

Aman: We have good quality standards in India.

Quality can be an issue?

Aman: Quality can definitely be an issue. There are certain customers who want quality and certain customers who want price. But in India fortunately we are more quality conscious than price conscious. Because when we start getting product under price then we are hit by China so we have the advantage of giving good quality products at reasonable price. And India has always maintained that consistent quality as i said earlier also 40% goes to Europe and USA. One should be having decent amount of quality that these markets, which are very quality sensitive are accepting our products. It is not that we are only selling bicycles and low end products to you know African markets where the reach of quality is not more important.

I just spoke to Mr Bhupender from Finolex and asked him about the impact of euro zone crisis. According to him, it's a big opportunity for India. Do you agree?

How and in what terms?
Khalid: Because of the crisis we are actually trying to get out of, you know we are trying to find new markets. That’s an opportunity.

Aman: How have we increased our exports tremendously?  Because we went to new markets, so we captured new markets. At the same time the old markets have also bounced back to certain extent. So it's a double benefit to the exporter.

But don’t you think it will take time to explore new markets. Suddenly you can't jump
Aman: We are already on.
Khalid: We are better now
Aman: The new markets are in fact found waiting because they have not experienced India. The results and feedback which we have got so far says, why have India not come earlier. That's the positive that we get from the market that we have not entered earlier.

H R Khan, RBI Deputy Governor in his speech has said that settlement period has been increased to one year for Indian Exports? How will it benefit the exporters?
Khalid: If the settlement period is increased then the advantage is that you have more edge to sell on a credit sale. Earlier you had short time-6 months-180 days. Now you have a chance to give your customers 365 days credit

Sorry to interrupt, but the chances of default are increasing nowadays.
Khalid: With ECG covers you can definitely cover your risk that's what is there with us. Chances of doing much bigger business are possible.
Aman: The only thing I would like to add out here, that if the credit is given at LIBOR rate then we are comparable, if it goes at 14-16 percent then it is not viable to give long term credit.

Which of the component(s) doing well in the international markets?
Khalid: Iron & Steel doing very good, automobile components, Non-ferrous - these are the sectors which are doing very well overall as well as from the western region.

Aman: Reducing taxation is the only way that could probably benefit the exporters. Because obviously if you are going to increase interest rate at the other end, take out EEPB, what is the final benefit that the bottom-line affect my company. I don't see really any sweeping changes coming in the budget to be honest. They need to reduce taxation, bring it down to certain extent. Or have a dual taxation. For exports have a lower rate of tax. Subscribe your copy now !