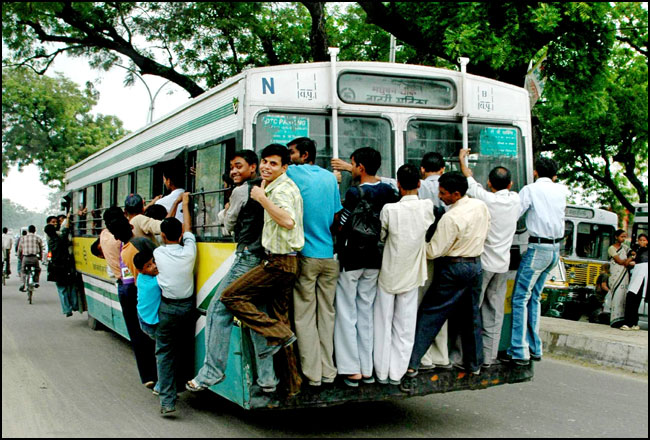 Transport sector in India is going great guns as many of the projects in different cities of India are under various stages of implementation. As the country grows, the pressure on the transport sector is on the rise and the demand for a robust transport system comes to the fore. To bridge the gap between the place of work and residence, the need of the hour is to provide faster mode of transport such as bullet trains inter-connecting different cities or far flung areas. This can also ease out pressure on the real estate sector as the horizontal space for constructing residences are shrinking in major cities of India. The transport sector in India is large and catering to more than 1 billion population is a mammoth task. The sector comprises mainly rail, road, air and water transport. The rail mode is largely monopolized by Indian Railways. Road transport is mainly in the hands of the private sector but the infrastructure development responsibility rests with the Government. Air transport is a mixed lot with both Government and private sector participation. Despite having a large coastline, the water transport mode in India remains largely on paper and the development is far from satisfactory. The task of transporting men and material in a country like India is highly challenging. The safety aspect is of paramount importance which is not up to the mark in any mode of transport in India. People travel on rooftops of buses in Rural India and local trains in cities like Mumbai. Over capacity is the problem area in many of the modes of transport be it rail or buses. Overloading of goods in trucks is a common feature.

In India, the transport sector emission generally comprises from road transport, aviation, railways and shipping. In 2007, road transport sector alone emitted about 142 million tonne of CO2 equivalent. As per a study conducted by the Ministry of Urban Development through Wilbur Smith Associates Pvt Ltd in selected cities, daily trips are anticipated to double from 2286 lakh to 4819 lakh during the next 24 years. The environmental damage or degradation are significantly lower in rail. Rail construction costs are approximately six times lower than road for comparable levels of traffic. The preferred mode in India is rail, but the capital investment requirement is huge in this sector.

To cut down the emission, the Government of India has implemented Bharat Stage-IV Emission norms, in respect of 4-wheeled vehicles in National Capital Region (NCR), Mumbai, Kolkata, Chennai, Bangalore, Hyderabad including Secunderabad, Ahmedabad, Pune, Surat, Kanpur and Agra w.e.f. 1st April, 2010 and in Solapur and Lucknow w.e.f. 1st June, 2010. Moreover, Bharat Stage III emission norms, in respect of 2,3 & 4-wheeled vehicles, have been implemented in rest of the country w.e.f. 1st October, 2010. Ministry of Road Transport and Highways is empowered to lay down under Motor Vehicle Act, 1988 and Central Motor Vehicles Rules (CMVR), 1989, Emission norms (for new vehicles) and Pollution Under Control (PUC) norms (for in-use vehicles) in respect of various categories of Motor Vehicles plying on different fuel such as Gasoline, Diesel, CNG, LPG etc. It gradually tightens the Mass emission norms for new motor vehicles as per the road map recommended by Auto Fuel Policy and the PUC norms for in-use vehicles to check vehicular pollution. Further, National Action Plan on Climate change (NAPCC) was released on 30th June, 2008. The National Action Plan outlines eight Missions. National Mission on Sustainable Habitat is amongst the 8 Missions that addresses policy and technological measures for emission saving in the transport sector.

The public transport systems like metro rail, Bus Rapid Transit System and Buses for urban transport in PPP mode are taking off in places like Mumbai, Chennai, Bengaluru, and Delhi. These systems promise a lot with regard to reducing the Green House Gases emitted in the atmosphere. Some of these projects get delayed due to land acquisition issues, requirement of huge capital, environmental issues and lack of political will.

Dedicated Freight Corridor Corporation of India (DFCCIL) is a Special Purpose Vehicle set up under the administrative control of Ministry of Railways to undertake planning & development, mobilization of financial resources and construction, maintenance and operation of the Dedicated Freight Corridors. In the first phase, DFCCIL will be constructing two corridors – the Western DFC and Eastern DFC- spanning a total length of about 2800 route km. The Eastern Corridor, starting from Ludhiana in Punjab will pass through the states of Haryana, Uttar Pradesh and terminate at Son Nagar in Bihar. The Western Corridor will traverse the distance from Dadri to Mumbai, passing through the states of Delhi, Haryana, Rajasthan, Gujarat and Maharashtra. The implementation of the DFC is expected to generate two major impacts on the freight movement: shift of freight from road to the low carbon intensive mode rail transport and inherent improvement in energy efficiency of freight rail through adoption of improved technologies. The project cost for both the corridors was initially estimated by RITES, in January 2007 as Rs 28,000 crore. This cost was subsequently revised to about Rs 37,000 crore by Japan International Cooperation Agency in its feasibility Report submitted to the Ministry of Railways in October 2007. When revised to current costs and prices, the two corridors are likely to cost in the region of Rs 40,000 crore. The cost for the project will be funded by a combination of debt from bilateral/multilateral agencies and equity from Ministry of Railways. The capital structure of DFCCIL will entail a debt equity ratio of 2:1. Substantial progress has been made in the implementation of Eastern and Western Dedicated Freight Corridors (DFC). In the current 11th Plan period, funding for Phase-I (Rewari-Vadodara) has been tied up with Japan International Cooperation Agency (JICA) and for Phase-II (JNPT-Vadodara and Rewari-Dadri), Engineering Services loan agreement has been signed with JICA. Works has been taken up for 54 major and important bridges. On Eastern DFC, appraisal for Khurja–Bhaupur section has been targeted in March 2011, as a part of the proposed World Bank funding of Ludhiana-Khurja_Bhauopur-Mughalsarai section. Work has been taken up in Mughalsarai-Sonnagar section and Dankuni to Chandanpur. Eastern and Western DFCs are targeted for commissioning in 2016-17.

• NAVI MUMBAI AIRPORT
Cidco, the nodal agency responsible for the development of Navi Mumbai Airport is likely to float global tenders for the project by the end of this month. The civil aviation ministry had given it’s approval to the master plan of this project recently. This project will be spread over 1,140 hectare be implemented in public-private partnership mode. More than Rs 4,000 crore will be spent on the first phase of the proposed airport.

• SIGNATURE BRIDGE
The DTTDC has floated expression of interest for the Cable stayed Signature bridge project and six firms had applied for the same. With a length of about 575 mtr and a height of 175 mtr the proposed Signature Bridge would have a bow-shaped pylon in the middle. This bridge will connect two banks of Yamuna and will be an important tourist destination. The main bridge is a bow-shaped, cable-stay structure. The cost on this project is likely to touch at Rs 1200 crore. The first part of the Western Approach road in Delhi is expected to complete in December 2011.

• EIGHT LANE CORRIDOR IN BENGALURU
The tendering process is on for eight-lane corridor project, connecting Okalipuram junction with Khoday Circle converting the stretch between Bhashyam Circle and KR Circle near Majestic into a signal-free stretch. Bruhat Bangalore Mahanagara Palike (BBMP) has called for a prequalification bid for this project recently. The estimated cost is Rs115 crore.

• KOCHI METRO PROJECT
The Kochi Metro spanning 25.253 km from Thripunithura to Aluva is a proposed rapid transit system for the city of Kochi in Kerala. KINFRA is the nodal agency for this project. The alignment was created by the Delhi Metro Rail Corporation and is planned to be made on a State -Central partnership basis. The nodal agency for the project is KINFRA. Kochi Metro Rail Corporation would be formed to operate the metro, once the project is complete. The plan submitted by DMRC in 2005 was for an estimated Rs. 3,000 crore. Due to the delay in implementing the project, the DMRC has revised the plan and is expected to cost around Rs 5,000 crore. There will be 26 stations. The Greater Cochin Development Authority (GCDA) had provided its land at Manappattiparambu to the Delhi Metro Rail Corporation (DMRC) to store the machines to reconstruct the North ROB. The State Government had allotted around Rs 158 crore for the preparatory work. The construction of the flyover near the KSRTC stand is expected to start shortly.

• RAPID METRORAIL GURGAON (RMG) PROJECT
The feasibility study to extend the service of India's first private light rail transit system — Rapid MetroRail Gurgaon (RMG) from Sikanderpur Metro station till the end of Golf Course Road covering 7 km is completed and the proposal is submitted to the Haryana Government for approval. This extension is likely to cost Rs 2,000 crore in addition. This project is being promoted by the consortium company of DLF Metro Ltd and ITNL Enso Rail Systems (IERS).

The various programmes undertaken by the Government such as National Highways Development Project, Pradhan Mantri Gram Sadak Yojana, Metro rail projects in prominent cities of India are expected to go a long way in providing long lasting solution to transport woes of the Indian public.