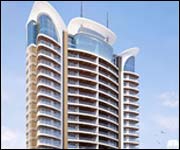 Supreme Universal is constructing new Residential project at Chembur, Mumbai. This project comprises a tower having G+18 floors of 4 BHK total 25 apartments. The completion is expected by October 2012.

I don’t see any sort of correction really happening in the near 6 months, atleast in the metro markets. Land is not getting cheaper , Construction costs is only going up and is further only going to escalate, we have been seeing the inflation levels riding and because of which labour prices are on the rise. The Government has not really taken any great measures to boost our real estate’s industry.

Could you tell us about your activities in the realty space especially focusing on the high end luxury segment?

With over 3 decades of experience in the Indian real estate sector, and completing over 50 projects Supreme Universal provides upscale residential complexes, office spaces across prime locations in Mumbai and Pune. To Name a few in the high end segment we are doing

What kind of demand curve can you see for luxury housing in metro cities of India?

Although, the demand for affordable housing still remains high, the noteworthy change is the increasing demand for luxury homes. The young Indian population has the persona that inspires large lifestyle in every sense. We discovered that a substantial niche demand existed for large apartments and luxurious room sizes and lifestyle amenities from buyers in the metros. With increasing rising income levels and the younger generation who has traveled and seen the world can now easily distinguish between luxury and non luxury products and now aspires to achieve that luxury apartment for him. There is a steady percolation of wealth among a cross-section of the population, most of them being businessmen or people from the top management, where many of don’t even seek housing loans. So we should see this demand curve going only up in the near future.

Which of your signature projects was the most challenging? Please tell us how could you overcome the challenges and complete this project with utmost satisfaction.

Supreme Pallacio in Baner, Pune was one of the most challenging projects for us. When Supreme conceptualized this project, there were no such luxurious & lifestyle schemes in entire Pune and its vicinity . Taking a plot and constructing a bungalow was considered high class or a better option rather than spending over a crore over a flat in this particular area. We did a detailed market survey along with a well known IPC research team who helped us to crystallize our product. Design development focused on creating a product that married the ambience of a bungalow with functionality and security of an apartment. Touch and Feel Sample Apartment and major amount of landscaping created at site even before launch and it did wonders for us but what was important was the speed of the construction which was delivered on time inspite of some real major finishing and infrastructure work in it.

What’s your take on providing affordable homes to the masses without compromising quality aspect? In what way are you exploring this segment which can solve housing problems in our country for the common man?

We are doing a couple of affordable housing projects, but I would rate them more as the mid segment housing. We don’t believe in doing something where we cannot provide good quality homes. And currently at present I don’t think we have that support from the Govt. where can provide homes in the 5lacs to 25 lacs bracket. I would rather not get into that segment as on today. For doing affordable housing you need a very good government support in terms of faster approvals, getting accress to very cheap land which is difficult to find in metros. Micorfinancing, we need some real good support from the government to give loans to these people , because most of buyers in this segment don’t even file tax returns which makes it difficult to give them a loan. We are studying a few markets where we have access to cheap land and also researching of using prefab technology which reduces the labour shortage and in turn gets down the cost. Hopefully we should be closing on a couple of deals in this segment too.

What's your view about and contribution towards the green building development in India?

I think most of the developers are going the green way. We are seeing a lot of more LEED certified building now being developed. We as developers have been using all the possible measures in our residential projects right from using Sewerage Treatment Plants, Rain water harvesting, using of solar water heaters and planting a lot of trees in and around all our properties.

Could you please enlighten our readers about the realty trends expected in the next five years?

The future of the real estate story in india is very rosy. Mainly because of the huge amount of investments coming in from out. There are huge investments happening in major infrastructure projects like power, airports, ports roads and overall connectivity. And at the rate of which urbanization is happening , more and more young people moving to bigger cities . Every MNC wants to enter india because of its huge consumer market so the requirement for Commercial Office and Industrial space will only increase and ultimately create more jobs. With increasing income levels of people and the standard of living which has improved over a period of past few years people want good houses, which in turn will increase housing demand where itself there is a shortfall of close to 26 million homes. So, Overall I See the future of India in the next 5 years very bright.

Do you see any real estate price correction happening in the next 6 months?

I don’t see any sort of correction really happening in the near 6 months, atleast in the metro markets. Land is not getting cheaper , Construction costs is only going up and is further only going to escalate, we have been seeing the inflation levels riding and because of which labour prices are on the rise. The Government has not really taken any great measures to boost our real estate’s industry, delaying of approvals adding new taxes like VAT and Service Tax and such high rates of Stamp Duties will only increase the end product because of which the end user suffers. And hopefully we should have good monsoons. Considering all these facts I do not think the prices can come down.

What can be the solution for India’s ever growing housing deficit? In what way the builders & developers fraternity can contribute to the solution?

As I mentioned earlier it has to be a joint initiative by the developers and the Government which together can substantially bring down Cost. Improving connectivity from metros to suburbs so that we can see more of satellite townships coming where land is cheaper unlocking many land parcels which are stuck due to various reasons by the Govt. Faster approvals increasing of FSI, giving taxation benefits to developers who are doing affordable housing and schemes for the economically weaker section something like the 80 IB. Reducing or abolishing taxes like VAT and Service Tax on apartments which really was not required and has increased burden on the end consumer. Getting into microfinance and helping the people in the weaker section to give loans at cheaper interest rates

From the developers side-

Bringing in new technology to save cost, doing more of Joint Ventures with land owners and PPP so the investment in land is minimal, concentrating on bigger volumes of work with lesser margins